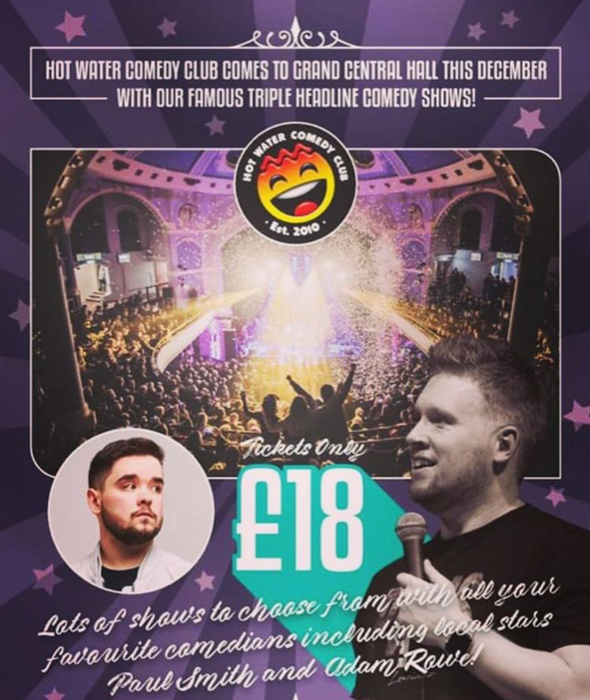 Hot Water Comedy Club was founded in 2010 by brothers Paul and Binty Blair, and since then has gone on to become one of the most successful comedy clubs in the world. In December 2016 they opened Liverpool’s first purpose built comedy club on Seel Street, open 7 days a week, which rapidly achieved unprecedented success. Now as we enter the party season of December 2019 they have, due to a huge demand taken over the Grand Central Hall on Renshaw Street also.

Based across three nights, Saturday 7th December, Friday 13th December and New Years Eve -Tuesday 31st December. The likes of Troy Hawke, Alfie Brown, Adam Rowe and the sensation that is Paul Smith will take to the historic stage across each night. Tickets for the 7th and 13th December are only £18 with NYE tickets costing £25. A great way to spend the night out with friends or work mates over the holidays.

So as well as the regular nights over on Seel Street they will be bringing comedy to the former methodist church, former cinema and former home to the Liverpool Philharmonic orchestra, to name but a few of the building’s past iterations, Grand Central now houses a 47 bedroom hotel, the recently opened Smokie Mo’s bar and, its crowning glory, the 1,300 capacity Grand Central Hall, which is known as the Dome.

Maureen Bramwell  -Owner  of Grand Central Hall said “Paul and Binty have built up Hot Water Comedy in the city and behind over the past 10 years. It really has become the best comedy club, so when they approached us about taking over the Dome for several nights over December it was a no brainer. We look forward to some laughs over the festive period.”