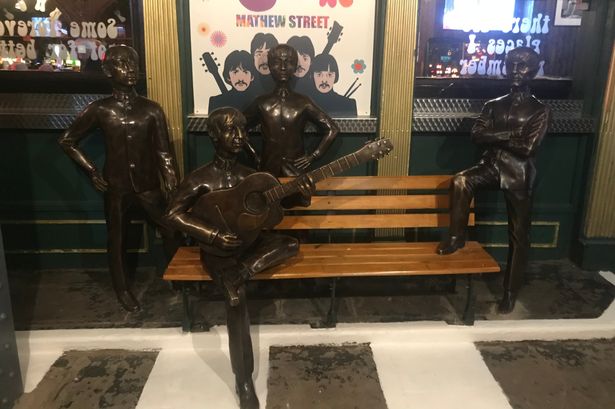 The sculpture of the Fab 4 is positioned just inside the entrance of the world famous Rubber Soul Complex.

The statues of Paul, John George and Ringo where commissioned a year ago by the owners of the complex, Pub Invest Group, to sit just inside the venues entrance. Revellers and tourists alike have been getting pictures taken with the statues since their arrival just over a week ago.

Rubber Soul is the sixth studio album title by the English rock band the Beatles. It was released on 3 December 1965. General Manager of the Rubber Soul Complex, which includes 5 venues – including the The Rubber Soul , Erics and Route 66, Jimmy Boland said ” We have had tourists, stags, hens as well as locals passing popping into the entrance for pictures. From young to old.  We feel it is yet another addition to this great street in the city centre.”

The Rubber Soul complex on Mathew Street is the absolute epitome of Liverpool nightlife. There is something for all ages and tastes, with music from the 60s through to the present day, as well as live music every night of the week and live comedy shows every weekend.